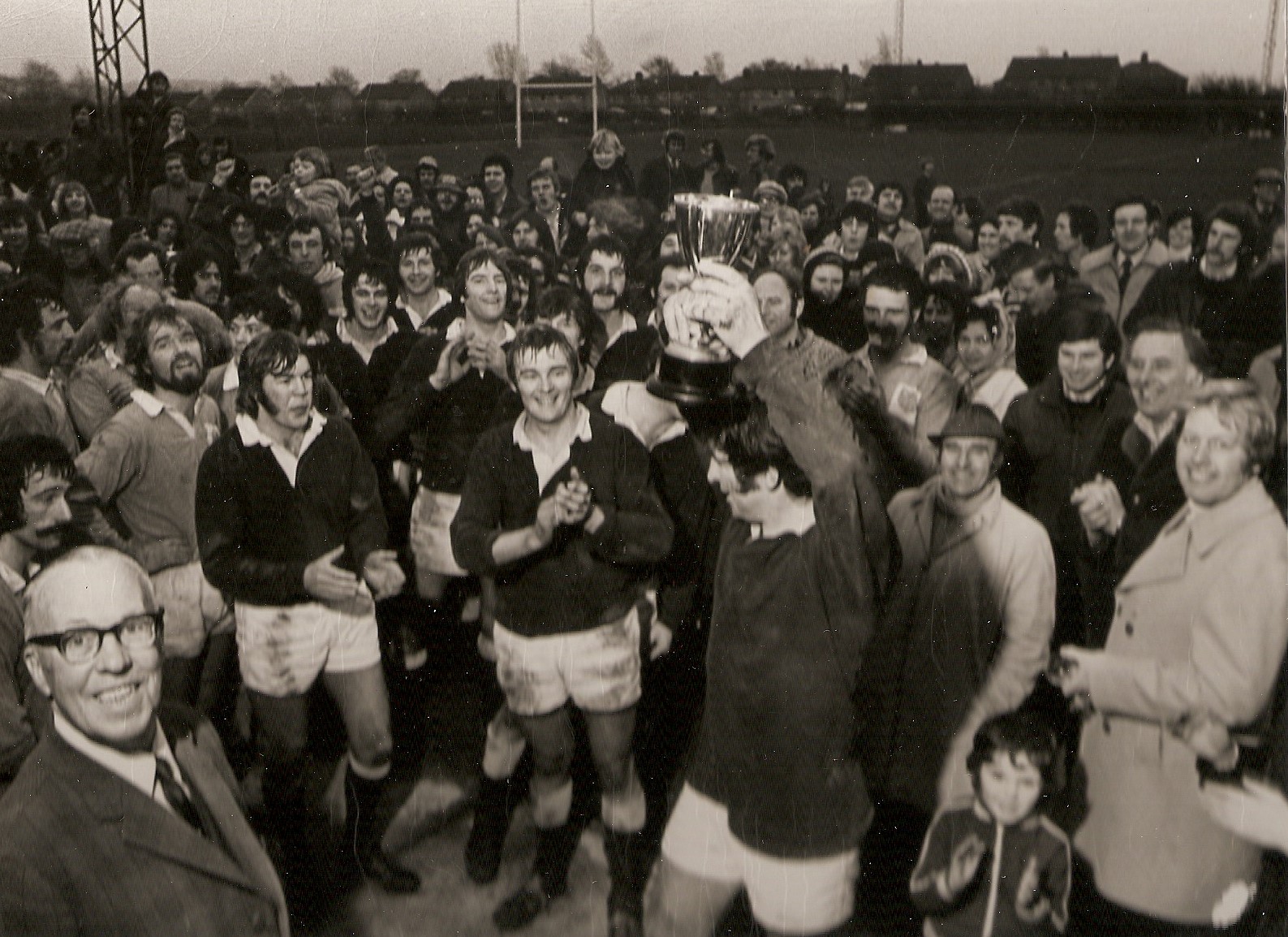 There had been two previous Saffron Walden clubs, one before the First World War and the second in the 1930's and 40's. Rugby was played in Saffron Walden in the 30’s and 40’s on the land behind Shire Hill recently occupied by Englemans Nursery. The colours were dark and light blue hoops.
The hard winter of 1962/63 resulted in many frozen pitches and little rugby being played. Peter Reader, John Soulsby and Martin Smith - who all played for Upper Clapton, used to meet at the Cross Keys pub in Saffron Walden on Saturday mornings instead of playing, discussed the formation of a local club.
A local newspaper advertisement attracted 15-20 people to the inaugural meeting held in the Cross Keys pub, and a steering committee was formed. The first captain of the club was Iain Wright-Watson, a former Kent hooker, followed by Joe Massingham.

The first President of the club was a City Banker, Frank Gelling. Frank’s contacts enabled the club to rent Wimbish Recreation Field from the parish council.

Frank's friendship with Tom Latham, a Thaxted farmer, led to the recruitment of some 'class' players, including Jeremy Janion (who later went on to play for England), Ian MacDonald, Frank Bennett, Bob Russell, Bryan Peachey, John Smith and many others later strengthened when a number of Old Stortfordians joined us when their club folded.
The seconds and soon a thirds played at the County High School.
Saffron Walden RFC originally joined the Essex sub-county of 'Eastern Counties', but changed to Cambridgeshire when we were unable to get county trials for any of our players, we have always belonged to Cambridge University & District Referees Society.


Saffron Walden RFC played a scratch game against Bishop's Stortford at the end of the 1962/63 season which was lost badly, despite Iain Wright-Watson hooking all of Walden's put-ins and most of Stortford's, whilst sliding backwards at every scrum. The first proper game at the start of the 1963-64 season was against Bury St. Edmunds 'A' which Saffron Walden won 19-9.
John Pollitt was inspirational in further establishing the club in the mid to late 60’s. A sports master at Saffron Walden County High School. Not only did John introduced the playing of rugby to the school but the club now had the facilities to train during the week under cover at the school’s gym. It was during this period that John Pollitt introduced many players to the club from the school namely Mick Everitt, Robin Chisnall, Tim Crawley and many others including Willy Saul who was the youngest player to play for the 1st.
Wimbish for a few years was the club's home pitch and RAF Debden provided facilities of a second pitch as well as training in those cold hangers. The Rose and Crown the headquarters until it was burnt down in 1969. The Rose and Crown was just a short walk from the common car park and so became the popular meeting place prior to matches. On several occasions the 2nd XV were criticised for drinking too much pre-game and that it was contributing to a run of poor results. Mick Bronniman, 2nd XV captain at the time, decreed that only "halves" should be consumed before games. From this point on it was likely that more beer under this rule was drunk but the 2nds did not lose a game for the rest of that season!!

The club used the Saffron Press in the town as it’s headquarters and teas until the early 70’s and eventually moved their headquarters to the King’s Arms and the 1st team pitch at Wimbish to RAF Debden.

In 1967 Jack de Lee took over the King’s Arm in Saffron Walden. Jack being a keen rugby fan having played for Ilford Wanderers for many years and showed an interest in our club and was elected as Chairman at the beginning of the 1971-72 season. Jack was chairman for 15 years. It was through Jack’s interest in the club that the facilities at the King’s Arms being the kitchen and the large backroom were provided free. This enabled the club to have a base from mid-morning on Saturday through to the evening.

It was in the early 70’s that the club’s committee started the progress of searching for land to buy. No land was available in Saffron Walden and the committee were able to locate land at Henham. Colin Vickery with his contacts in the agricultural industry located the land. The club was unable to secure a loan from the RFU unless the club could prove that it owned it’s own land. It was through interest free loans from Jack De Lee and Mick Merlane, both local publicans, that the club were able to purchase the land at Henham.

So, in the 1975-6 season the committee and members of the club got the ground playable and started building the facilities at the ground including a brick wash tub, wooden changing facilities and clubhouse, which was an old hut used as the original waiting room at Audley End railway station. The “A” frame of which can still be seen today in the clubhouse wall.

The likes of Ian Wright-Watson, Roger Lynn, John Pollitt, Brian Peachey, Frank Bennett, Colin Vickery, and Martin (Tiny) Curtiss, did an enormous amount of work to help the club establish itself at Henham.

Further development took place in 1982 with the construction of the current facilities where Roger Conner and Chris Howard did a huge amount of the work, and in 2000 the playing area had an extensive drainage programme.
In 1976 Walden was one of the first clubs in the area to introduce the then new mini rugby. This was specifically aimed at boys from non-rugby playing schools and encouraged many new players to the game. Roger Smith and Chris Lipscombe organised the first Colts team in 1978, the difficulty then was finding fixtures as few other clubs had Junior sections, and only four games were played. By 1984 the under 19's and under 16's had full fixture lists and Walden were providing most of the players for the Cambridgeshire teams. A shortage of organisers and supporters led to the demise of the junior section in the early 90's, but thanks to the efforts of Hayden and Debbie Crumpler this was re-established a few years later.
Like many clubs, Saffron Walden has had its ups and downs in terms of results and playing strength. The first “Golden Period” came in the late 60’s when a number of new players joined to strengthen the first team and allow for the addition of a third fifteen. The inaugural Cambridgeshire Knockout Cup was won, for the first of 8 times. This record has only recently been taken by the Cambridge City club. Walden were also runners up on a further 8 occasions.
The 80’s saw, to date, the strongest period in Walden’s history with a place in the 1st Division of the new Eastern Counties Merit Table which contained all the top clubs in the area. In 1986 Walden just lost to Sudbury in the Final of the Eastern Counties Cup and then played Blackheath in the John Player Cup, the first and only time we entertained a 1st Class club at Springate. Walden were unlucky to lose 9 pts to 16 pts.

The club were running up to 6 sides during the 80’s.
Saffron Walden has consistently developed the talents and abilities of its players and encourages them to strive for the highest goals. This naturally has led some to move on to more Senior clubs, and in the case of Jeremy Janion to 10 England Caps. Right from the early days when Dave Morley left to join Leicester through Frank Bennet and Andrew Wisbey to Bedford, Walden has always encouraged members to play at their highest level. The great benefit is that these players usually return and pass on their experience to other aspiring members. Walden has also benefited from players with senior joining the club: John Keily came from London Irish, David Chisnall from Waterloo and Alan Mitchell from Durham. Recently,
In the late nighties with leagues now being expanded across all levels of Rugby Union Saffron Walden entered Eastern Counties Division 1 and finished a creditable 5th in the 1998-99 season. The following season under the leadership of New Zealander Damon Jakeman they gained their first promotion winning the league in style. This forged a long lasting relationship with his home club Wiauku which continues right to the present day where young players from both Saffron Walden and Wiauku have spent a season or two playing on the the other side of the world bringing lasting friendships between players from the two clubs.
With promotion to the London Leagues they played in 4 North East and finished 3rd in their first season and then were champions in season 2001-02 to gain promotion to London 3NE.
A couple of years in mid table then saw the team relegated back into London 4NE after a difficult end to the 2005-06 season. But they regrouped and under the leadership of coach Tom Hughes and Captain Paul Marshall they immediately bounced back as Champions the following year. This was recognised Nationally when they were Runners Up in Rugby World Magazines Team of the Season for being the youngest Coach/Captain Combination in the rugby clubs history with Paul Marshall having played well over 300 games for the club and still available for first team selection.
Over the next 6 seasons under Coach John Read the team settled comfortably into the league finishing mid table and with the Restructuring of the League system in 2010 they found themselves in London 2NE.
Tom Hughes was reappointed as Player Coach for Season 2013-14 and this along with a good influx of quality players enabled the club to look towards the top of the league and they finished second. Captain Adam Miles took the team down to Twickenham rfc for the playoff and it was one of the most memorable Rugby Matches for all those that played and travelled to watch, it went down to the extra time and then to the last play of the game only to lose by 1 point 44-43. It was reported as 'a true celebration of amateur rugby'
The following season could not quite match the highs of the previous year but they still finished a creditable 4th in the league.
2015 saw the appointment of Danny Hunter as Head Coach, assisted by Nigel Howe and with James Gosden as Captain things could not have worked better. Although still firmly an amateur club a professional attitude was instilled and the results started to come. They won the league in style with one game to spare and were promoted to London 1North as worthy champions, the clubs highest level since the league structure started. Plus once again winning the Cambridgeshire Cup. Finishing 8th in the league, the club were relegated back to London NE2 Where we still find ourselves.

Recently, Joseph Gaffan has not only represented England U18, but has also signed a pro contract with Northampton Saints. The foundations of the past are still providing pathways for young players to play Senior rugby at the level their skill and desire takes them.


Thanks to Martin Smith, Graham Marshall and Billy Wilson for their help in putting together this brief history
Tweet
Tweets by @@swrugby